The Bourbon chambers, the Casa del Príncipe don Carlos and the Casa del Infante don Gabriel can only be visited on an official guided tour

The Bourbon chambers, the Casa del Príncipe don Carlos and the Casa del Infante don Gabriel can only be visited on an official guided tour

Lines 664 and 661 from the Moncloa interchange

The Royal Monastery of San Lorenzo de El Escorial is one of the best reflections of the ideological and cultural aspirations of Spain's "Golden Age", as expressed through the unique blend of Italian and Flemish artistic styles favoured by Phillip II.

Grouping many functions in a single building, it began as a monastery for monks of the Order of San Jerome, whose church would become the final resting place of the Emperor Charles V, his wife and his son Phillip II, and a long line of relatives and successors, where friars would offer up endless payers for the salvation of royal souls. There is also a palace for accommodating the king, as patron of the foundation, and his retinue. The college and seminary complete the religious function of the Monastery and the Library caters for these three centres. The layout of the complex has, to a certain extent, remained unchanged. Charles V played a decisive role in the foundation of this Royal Site through the great influence he had over his son, the example he set by passing his last few years here among the Hieronymite monks and through the need to provide him with a fitting burial place.

Once he decided to found the Monastery, in 1558 Phillip II began to look for a suitable site, which he found at the end of 1562. The construction work began soon after, according to the plans of Juan Bautista de Toledo. By 1571, the monastery was more or less finished; in 1572 work began on the "King's House" and in 1574 on the Basilica, which was finished in 1586 and consecrated in 1595. This date could be said to mark the end of the entire project, although the last stone was not laid until 1584 and decorative work continued for a number of years. All construction was meticulously supervised by the King. This site should not be considered the work of a single person, but rather the fruit of a complex collaboration between two master architects: Juan Bautista de Toledo and Juan de Herrera. The first, who had worked in the Vatican as an assistant to Michelangelo, was responsible for the general floor plan and most of the design. During the period in which the second was in charge of the works, the majority of the complex was completed, including many parts that had not been designed by Toledo. Considering the significant input from other Spanish and Italian architects towards the final definitive results, El Escorial is an incredibly unique reflection of the character of Phillip II.

Highlights within the El Escorial complex include the Royal Library and the Pantheons for both Kings and Infantes.

Phillip II would stay at this palace from Easter through to the autumn, especially towards the end of his life; whereas his successors would generally visit for just two or three weeks in November. Phillip V tended to spend the whole autumn up to the beginning of December at El Escorial, a custom upheld by the rest of the Bourbons until Isabella II.

When it was built, the Monastery was an isolated spot in the middle of the countryside with just a few buildings making up the estate: the two casas de oficios and the Compaña. However, Charles III ordered the creation of a small courtly city, the architect of which was Juan de Villanueva, who, building on his classical Italian training fully embraced the nationalist spirit that El Escorial came to embody during the Age of Enlightenment in Spain. Highlights of his work include the Casa de Infantes and the Casa del Ministro de Estado.

Two sides of the Monastery –the north and west– are flanked by a wide open courtyard known as La Lonja, and the other two by terrace gardens in the square Italian style lined with box hedges. The Garden of the Friars extends along the entire south facade and part of the eastern facade, under the windows of the friars’ cells. Beyond this garden, at a lower level, are the vegetable gardens with a similar square layout.

The east terrace of the building is home to yet more enclosed gardens, similar to the Garden of the Friars but separated from this by niched walls as they were designed for royal persons. Surrounding the King's House, they make for some rather pleasant views from the Palace. 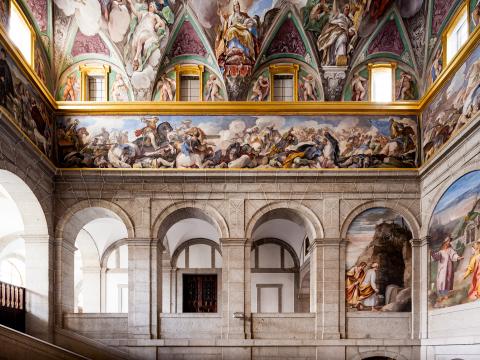 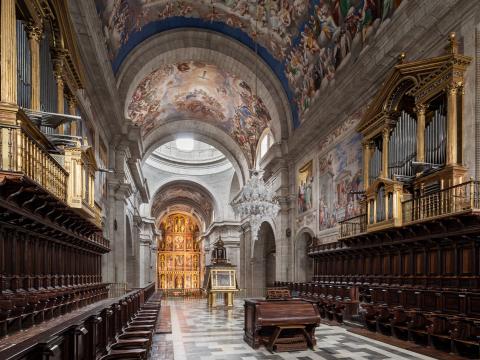 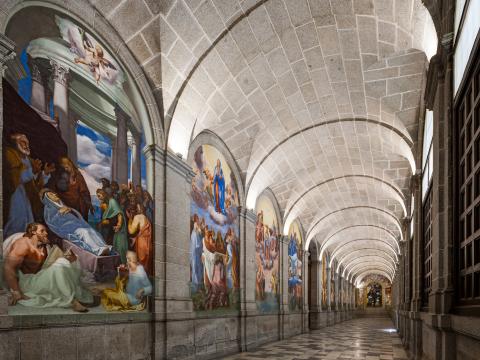 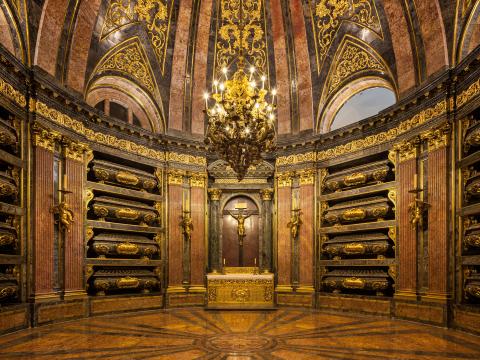 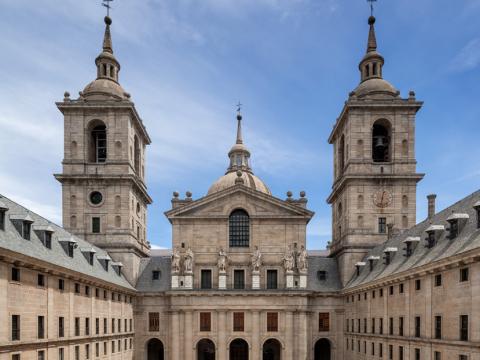 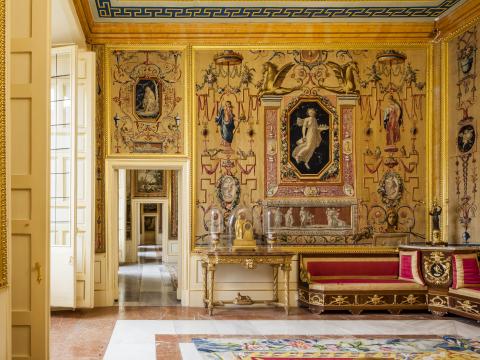